The 2022 World Junior Championship is back. This time it is the 2.0 version of the tournament that was cancelled back in December due to COVID. The action gets underway later on Tuesday, August 9th, in Edmonton, Alberta running through August 20th. With the tournament taking place in one location similar to the tournament in the bubble, all statistics and records have been reset. One of the pre-tournament favourites back in December Russia, will not participate as they have been disqualified because of the invasion of Ukraine. In their place is Lativa.

Just like in December, Team Canada is favoured to win the 2022 World Junior Championship. However, they will have heavy competition. Let’s take a look at the odds. 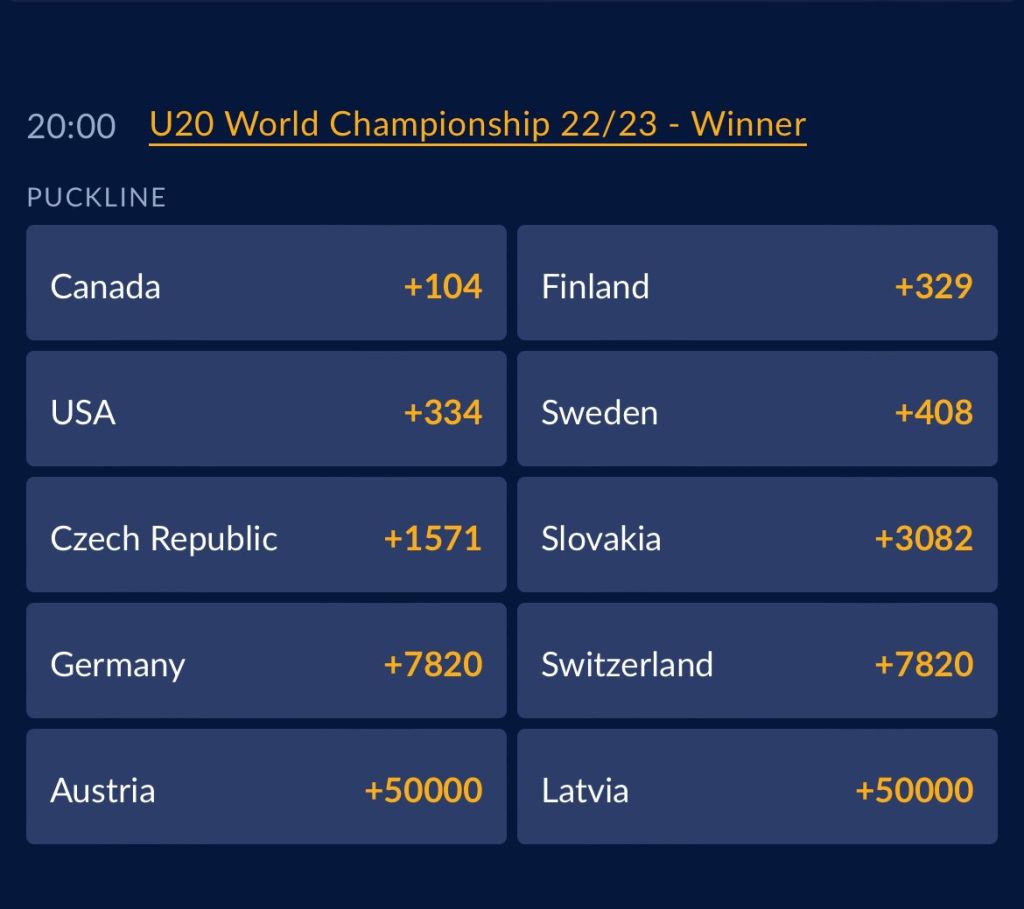 Entering this tournament every year, there are four teams that have a legit shot to win the gold medal this summer. Canada, Finland, USA, and Sweden.  It is no surprise that Team Canada is favoured to win the tournament at +104.

This is not an overwhelming favourite as Canada was last year. There are still some questioned marks surrounding Canada especially in between the pipes. However, Canada is looking for redemption after falling short against Team USA in last year’s gold medal game. However, Canada will have some holes to fill without Shane Wright, Owen Power, Cole Perfetti, and Kaiden Ghule. However, goaltending is where Canada will shine with Sebastian Cossa and Dylan Garand.

NHL: The Philadelphia Flyers Have More Work To Do In The 2022 Offseason

NHL: What the Islanders Do Next All Falls on Lou Lamoriello

NFL: Best Bets For 2022 NFL Defensive Rookie Of The Year

As mentioned before there are other teams that can win this thing. Let’s take a look at those. Finland is the second favourite to win the tournament at +329. While the defending gold medalists Team USA comes in at +334.

Team USA is a good value play. After all, they are the defending champs. In the winter, things did not start off well for them. They lost a game because of COVID. Team USA still has a good team despite some losses as well. Logan Cooley, Brock Faber, Luke Hughes, and Matt Knies lead the way for the Americans as they look to go back to back.

Never discount Finland, especially with this hungry roster that includes Topi Niemela, Aatu Raty, Ville Koivunen, Samuel Helenius and Brad Lambert. So this nation is hungry to continue its dominance on the ice after winning the gold medal at the Olympics and World Championships.

You don’t want to miss the summer of hockey in Edmonton.

What Can The AFC Expect From The Raiders And Colts?

AFC West Odds: Can The Chiefs Remain Atop The Division?

Odds Favor The Avalanche To Repeat As Stanley Cup Champions